The Pele Literature. An Annotated Bibliography of the English-Language Literature on Pele, Volcano Goddess of Hawaii

The Pele Literature.   An Annotated Bibliography of the English-Language Literature on Pele, Volcano Goddess of Hawaii. 1992. Honolulu: Bishop Museum Press. 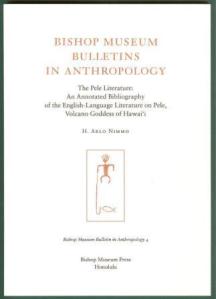 This annotated bibliography evolved from a series of articles H. Arlo Nimmo published about Pele, volcano goddess of Hawaii. Of all the deities of traditional Hawaii, none has so successfully survived the post-contact period as Pele. The extensive and varied English language literature about Pele includes observations by early European visitors, writings of the first literate Hawaiians, academic studies, travel accounts, newspaper and magazine articles, and children’s books.

“This bibliography,” Nimmo writes in the Preface, “is intended for anyone with an interest in Pele – the person who wants to learn more about an ancestral deity, the student who must write a term paper, the scholar interested in investigating the past or present Hawaiian culture, the tourist who wants to know more than was offered on the tour, the teacher who wishes to add a section on Pele to the class curriculum, the applied behavioral scientist who needs to understand the world-view of Hawaii better, the developer who may wonder why some Hawaiians are disturbed at the prospect of geothermal energy plants in the volcano area, and anyone who simply shares my love and respect for the woman of the volcanoes.”